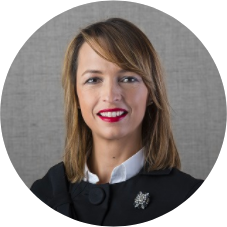 Graduated in Law from the University of Lisbon Law School, having subsequently followed her academic training at the University of New York, where she took a Master's Degree in Trade Regulation. At the University of New York Maria João Melícias was distinguished with the Frank Diersen Prize, which rewards the best Master’s student, and was also a guest research assistant.
She has a second Master’s degree in EU Competition Law from King’s College of London University and a postgraduate diploma in Competition Law from the same institution.
Between 2002 and 2012, Maria João Melícias was an Associate and Senior Associate in European Law and Competition at PLMJ, in Lisbon.
She was also a member of the Portuguese Association of European Law (APDE), of the Competition Commission of the International Chamber of Commerce (ICC) and the Portuguese Competition Lawyers Circle (CAPDC).
Before joining the Board on May 24, 2014, Maria João Melícias was a “référendaire” at the Court of Justice of the European Union, in Luxembourg.
Regular lecturer in academic courses and speaker at conferences, she has published widely, particularly on antitrust and competition policy-related topics.