The AdC imposed fines on six large retail food chains and two  suppliers for price fixing, harmful to consumers
The decisions
The AdC – Autoridade da Concorrência imposed a total fine of circa €304 million on six large food retail chains, two beverage suppliers, a board member and a director for price fixing of the suppliers’ products, a practice which seriously harms consumers.
The first decision adopted by the AdC  concerns concerted pricing  between Modelo Continente, Pingo Doce, Auchan and Intermarché, as well as supplier Sociedade Central de Cervejas (SCC), a SCC board member and a business unit director of Modelo Continente.
In a second decision, the AdC fined the same four large food retail chains (Modelo Continente, Pingo Doce, Auchan and Intermarché), as well as Lidl and Cooplecnorte (E. Leclerc), for concerted pricing through spirits supplier Primedrinks.
In the first case, the AdC’s investigation determined that the distributors and the supplier concerted prices for more than 9 years – between 2008 and 2017. This concerned several SCC products, such as beers Sagres and Heineken, ciders and sparkling water such as Bandida do Pomar and Água do Luso. The practice included bringing prices up gradually and progressively in the retail market.
In the second case, the practice of concerting  prices for various products in Primedrinks' portfolio - which includes  wines from Esporão and Aveleda producers,  whiskies such as The Famous Grouse or Grant´s, Hendrick’s gin or Stolichnaya vodka - lasted more than 10 years between 2007 and 2017, and also aimed at the gradual and progressive rise in prices in the retail market.
Through a common supplier, companies ensured the alignment of sales prices to the public, thus restricting price competition between supermarkets and depriving consumers from the benefits of price differentiation.
In the current two decisions, the AdC also imposed an immediate halt to the practice, since it was not possible to rule out that the investigated behaviour is still ongoing.
The sanctioned practice, referred to in competition terminology, as “hub-and-spoke”, is considered very serious and harmful to consumers since it deprives them of choice at the best price.
These are the first decisions in Portugal for a “hub-and-spoke” practice and sanction groups which represent the most important part of the large retail distribution market, thus affecting the majority of the Portuguese population.
Examples taken from the unannounced inspections carried out by the AdC include the following [in Portuguese]: 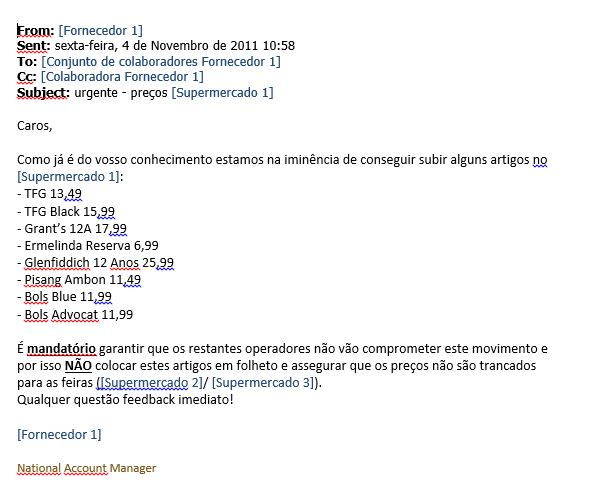 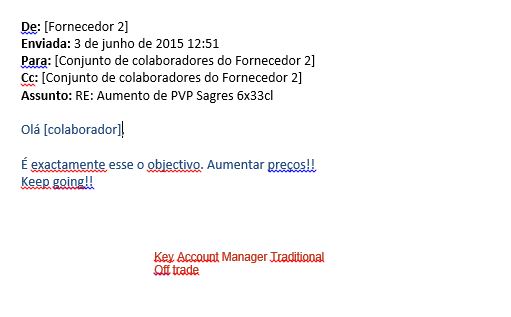 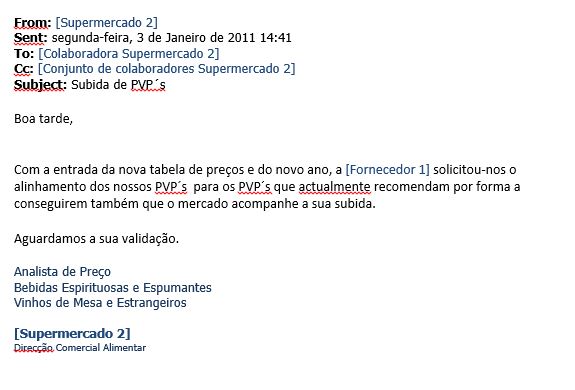 The undertakings also revealed awareness of the infringement: 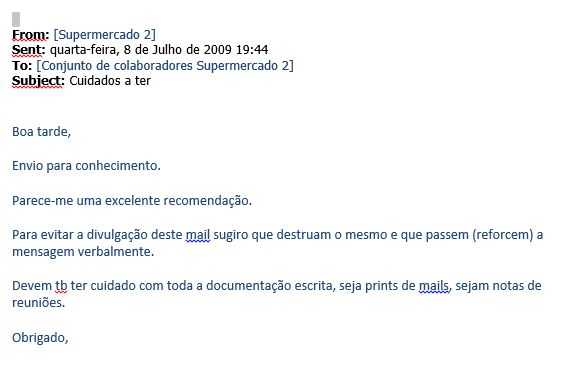 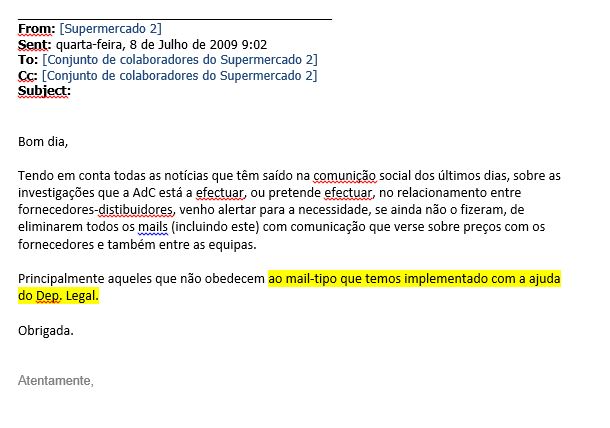 And they monitored the firms that sometimes deviated from the concerted price, insisting that each firm practiced an identical price:

In March 2019, the AdC issued Statements of Objections which were followed by the undertakings’ exercise of rights of defence against the alleged infringements. Such defences duly assessed and considered in the final decision.

During the investigation phase, the AdC also carried out complementary hearings requested by the undertakings. The results have been considered in the final decisions.

Competition Law forbids agreements that restrict competition between undertakings, in all or part of the market, reducing consumer welfare. Infringement of competition rules not only reduces such welfare, bubt it also harms firms’ competitiveness and innovation, therefore causing damage to the economy as a whole.
The AdC’s main priority is kept at strengthening enforcement, particularly of cartels, or equivalent practices, with a focus on those which have a significant impact on consumers.

The fines
The fines imposed by the AdC are determined by the  undertakings’ turnover in affected markets. According to Competition Law, fines can reach a maximum of 10% of the company's turnover in the last year of the practice.
In defining the fine, the AdC also takes into account the gravity and duration of the infringement, the degree of participation in the infringement, the collaboration provided by the undertakings during the investigation, among others.
Regarding the second decision,  it was necessary to take into account the so-called cumulative effect to Modelo Continente, Pingo Doce, Auchan and Intermarché. .


Fines imposed on each of the undertakings are as follows:

The practice sanctioned by the AdC has, in competition terminology, the designation of “hub-and-spoke”.

This is a practice equivalent to a cartel, in which distributors use the contacts they have with the supplier to ensure, through the latter, that every undertaking practices the same price. This ensured a generalized increase in prices and avoids direct contact between undertaking found in traditional cartels.
Such a communication scheme benefits those firms involved in the concerted practice, but harms consumers.

Both cases now sanctioned add to other investigations underway in the large retail sector. During 2017, the AdC carried out unannounced inspections in the premises of 44 entities. This led to the opening of 16 proceedings, more than a dozen of which concerning large retail. Currently, investigations have led to 7 Statement of Objections for “hub-and-spoke” practices sent large food retailers and to suppliers of spirits and non-spirits, packaged bread and cakes, as well as personal care, beauty and cosmetic products.